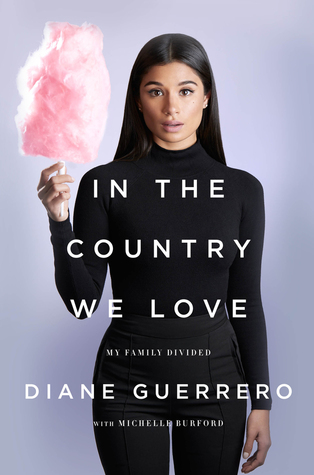 In the Country We Love: My Family Divided by Diane Guerrero
Published by Henry Holt and Co.

When Diane Guerrero was just fourteen years old, her parents and brother were arrested and deported to Columbia. As Diane herself was born in the US, she was able to stay, finish her education, and pursue her dreams of becoming an actor, eventually landing a roles in the popular TV shows Jane the Virgin and Orange is the New Black. But living apart from her family during her teen years and navigating the world as a teenager by herself changed the trajectory of Guerrero’s life and her relationship to her family.

In the Country We Love is fascinating, horrifying and inspiring all at once and I think it was so brave for Guerrero to put her story out there and share some of the most difficult things she’s ever experienced with the world. This is one of those books that I just want to say “read it” and leave it at that, but there were a few specific things about Guerrero’s story that really stood out to me that I think are worth pointing out.

First of all, when Guerrero’s parents were arrested and removed from their home, not one person from the government reached out to her, checked on her, found her a foster family, took her to see her parents when they were in jail in the US before being deported, NOTHING. She was a child, a United States citizen, who was without any parental support or legal guardian in the country and not one person from immigration, local law enforcement, or the FBI even thought to make sure she was going to survive on her own at fourteen years old. Luckily, her friend’s mother took her in for a few years and then she transitioned to another friend’s family, but I am sure there are plenty of children in a similar situation who don’t have the kind of close friendship network that Guerrero had. It is shocking to me that a child who should be considered a ward of the state by any rational definition wouldn’t be so much as checked on by a representative of the government at any point throughout this process or in the years as she was growing up in the US without a parent or guardian.

Secondly, the degree to which this situation destroyed her family cannot be overstated and I honestly felt that Guerrero glossed over some of the ways in which this negatively affected just about every area of her life, but man was this rough on them. She lost touch with her brother, her brother’s ex-girlfriend, and her niece, she spent years estranged from her mother, not just physically but emotionally as well, her parents eventually divorced (which of course could have happened anyway but the stress of what they went through certainly didn’t help their relationship), and her parents had no significant part of her adolescence and early adulthood. She figured things out on her own and navigated the world in her own way, but the impact that this had on her life is staggering and this is just one person, one story. I can only imagine how many similar stories are out there that are equally or even more devastating.

Guerrero’s story is not all sadness, though, and that is what makes this book so fantastic. She is a very positive person who took a terrifying and sad situation and turned her life into something to be extremely proud of. It’s not just the acting – she became an advocate for other undocumented people and hard for that cause in many ways. She is an inspiring person and the fact that she was able to make her own dreams come true despite the difficulties in her life is inspiring.

The last thing I will say about this book is that the audio is amazing. I typically find that when actors narrate their own books the results are nothing short of great, and that is definitely the case here. She is telling her own story, in her own voice, and that adds so much to this book. If you choose to read In the Country We Love – and you absolutely should – definitely go with the audiobook.

So super highly recommended! If you never read celebrity memoirs, read this one. It shouldn’t even be classified that way, it is so much more than that.

6 thoughts on “In the Country We Love: My Family Divided by Diane Guerrero”