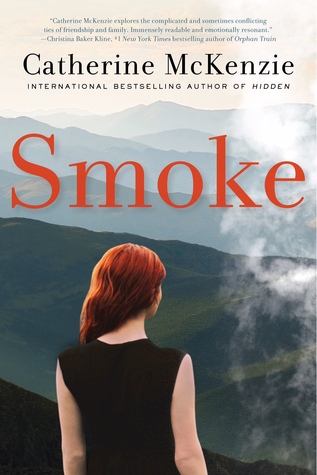 This is the third book by Catherine McKenzie that I’ve read in a relatively short period of time, and by now I can completely see why people like her books but I feel that they are very formulaic, and at this point, a little boring to me. This novel features a woman named Elizabeth who works as a fire investigator, and on the same night she and her husband decide to divorce, massive wildfires break out in their area and they are forced to evacuate their home. While Elizabeth works on investigating the fire and repairing her marriage at the same time, her ex-friend Mindy has decided to help the local man whose home was destroyed in the fire. As Mindy is working with the local humanitarian groups to find shelter and other necessities for this man, the fire becomes a fixture in her own home as her teenage son stands accused of having something to do with starting it.

As I was saying, McKenzie’s books can be formulaic but they are enjoyable. Smoke definitely fit that description – these women are similar to many others I’ve seen in stories like this, both from McKenzie and other authors like her, the conflicts are resolved in an appropriately happy(ish) way, and nothing super tragic happens within the novel. I found myself frustrated with both main characters in different ways, while at the same time I ended up liking them both despite their faults. Elizabeth frustrated me because she and her husband do that thing that so many couples do in books where they dance around problems and refuse to tell each other the truth, so they end up mad at each other for absolutely no reason. The most annoying kind of miscommunication, in my opinion. And Mindy was frustrating because she couldn’t see what was right in front of her face – her son was in trouble and needed her support in a major way, yet she was spending all of her time and emotional energy trying to help this random guy who she had never met before. It was kind of her to care about this man, sure, but her own son desperately needed her and she was ignoring his issues.

All of that being said, I did find the book enjoyable and it held my interest. Things were resolved essentially as I expected them to be, the world didn’t collapse, and the characters were essentially fine with things when the book ended. I don’t think it’s a spoiler to say that because that’s the way a lot of these kinds of books end. I don’t have any other McKenzie books on my kindle so I will likely be done reading her for now. Overall I can recommend Smoke, as I have with her other books, for those looking for something mild and entertaining.

8 thoughts on “Smoke by Catherine McKenzie”