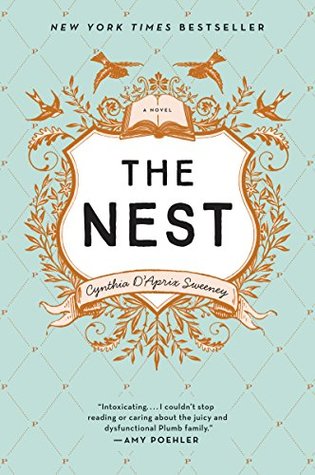 The Nest by Cynthia D’Aprix Sweeney
Published by HarperCollins

The four adult children in the Plumb family are anxiously awaiting the day that the youngest, Melody, turns forty, as that is the day that the trust fund, which they call “The Nest”, their deceased father set up for them will pay out. Just a few months shy of that date, the oldest, Leo, gets himself into a major car accident while drunk and has to pay out the family of the nineteen-year-old he injured who he was fooling around with when the accident occurred, using all of the money in The Nest to do so. This of course leaves the other three siblings shocked, angry, and resentful – and holding Leo accountable to figure out how to pay them back.

You would think that reading a story about rich people making stupid decisions that harm other people and not seeming to care too much about that would SUPER annoy me. And usually it would, but in Cynthia D’Aprix Sweeney’s hands, I enjoyed every second of this book. It’s more about the family dynamics between the four siblings – Leo, Jack, Beatrice, and Melody – and how each of them desperately needs the money in The Nest but doesn’t want to reveal to everyone else just how desperate they are. In Jack’s case, he mortgaged a second home without telling his partner and needs the funds to pay that mortgage off so no one will ever know what he did. In Melody’s case, she has spent her entire adult life trying to keep up with the Joneses and needs to figure out how to get her family back on track financially while simultaneously paying for her twin daughters’ college tuition. Bea has been floundering as a writer for years and would love the opportunity to just focus on her true love of writing a novel instead of working at a job she hates. And Leo, well he didn’t really care about the money before, but he certainly does now that he’s facing a divorce and financial ruin.

This is a page-turner for sure. The family dynamics are mostly what you’d expect in a rich people behaving badly type of book, but there were a few surprises and some major reveals that made the book deeper than I was expecting. Everybody in the family has their own issues (and some of them are ISSUES) but at the end of the day, they do try to come together and find a solution because in their own messed-up ways, they do really love each other and want the best for one another. It was funny to me to see the siblings fall into some classic oldest, youngest, middle categories in some ways and completely defy them in others – for example, you’d expect that Bea, one of the middle children, would be a “fixer” and she definitely is, but you’d expect for Leo, the oldest, to be the “responsible one”, which he definitely is not.

Ultimately The Nest is not best book ever material but it was highly entertaining and I really enjoyed the time I spent reading it. If this author writes a second novel I will definitely read it.

10 thoughts on “The Nest by Cynthia D’Aprix Sweeney”