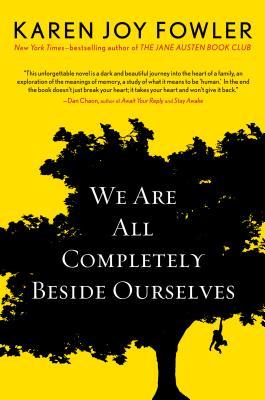 We Are All Completely Beside Ourselves by Karen Joy Fowler
Published by G.P. Putnam’s Sons

Meet the Cooke family. Our narrator is Rosemary Cooke. As a child, she never stopped talking; as a young woman, she has wrapped herself in silence: the silence of intentional forgetting, of protective cover. Something happened, something so awful she has buried it in the recesses of her mind.

Now her adored older brother is a fugitive, wanted by the FBI for domestic terrorism. And her once lively mother is a shell of her former self, her clever and imperious father now a distant, brooding man.

And Fern, Rosemary’s beloved sister, her accomplice in all their childhood mischief? Fern’s is a fate the family, in all their innocence, could never have imagined.

First of all, there are some summaries of this book that give away a pretty big spoiler, something that is integral to the book, but something that you don’t find out until maybe 75 pages in, something that I personally was very, very happy I didn’t know going in. So don’t read any summaries but the one above, and you will enjoy the surprise as I did.

Rosemary isn’t particularly likable in the beginning of the book, but as the reader learns more about this family it becomes very apparent just why that is the case. This family is so the opposite of normal, yet in some ways they are a typical American family, damaged and dysfunctional and yet still full of love for one another.

There’s so much I want to say about this book but cannot because I don’t want to ruin it for you. It’s so, so gorgeous and heartbreaking and I couldn’t put it down. I sobbed while reading it and when I think about it too hard, I get teary-eyed once again. I loved We Are All Completely Beside Ourselves and I highly encourage you to read it too.