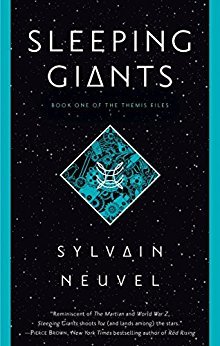 When Rose Franklin is a young girl, she falls while riding her bike and is found in the palm of a giant, metal hand. Seventeen years later, she is a physicist leading a team to try to understand what this hand is and where it came from. She is working alongside a powerful group of people, including several former members of the military, and what they will uncover about this mystery has the potential to change the world.

This book was SO MUCH FUN. I wasn’t sure what to expect but I absolutely loved taking the journey that Neuvel presents in Sleeping Giants. The book’s synopsis doesn’t do this story justice, which is a good thing, because I went in not knowing what to expect and that paid off tremendously. I was delightfully surprised by the characters, the mysteries within the book, the overarching purpose of what was really going on, and the way that Neuvel told this story.

I love how this book tells its story through a series of interviews by an unnamed and highly mysterious narrator. I loved how Neuvel managed to get at the heart of the personalities of these characters through this method alone – it was so creative and speaks to such a talent as a writer. The reader is kept in the dark about so much of what is going on in this book, including the identity and purpose of this interviewer, and that suspense was SO much fun for me. Once I learned it was a series, I got even more excited, knowing that at some point things would make sense and I could just relax and enjoy the ride.

I absolutely loved this book and can’t wait to read the rest of the series.