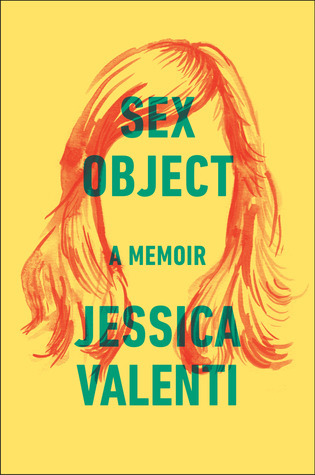 Jessica Valenti, creator of the widely popular feminist blog Feministing.com, has written several books about feminism over the years, but Sex Object is her first memoir about her own personal experiences. The book is not just about growing up in a world in which girls and women are treated as sex objects before anything else, but it’s about her own personal struggles, triumphs, and experiences throughout her lifetime.

I really like Jessica Valenti for many reasons so I had been pretty excited about this book. For the most part, I’m glad I read it, but I hate that I didn’t love it like I had hoped that I would. The parts of the book that I most enjoyed were Valenti’s personal stories, while unfortunately I didn’t enjoy as much the musings on feminism and what it means to be a woman in the world right now and in the 80’s and 90’s when she was growing up.

Part of my issue with Sex Object is that overall I’m not sure what Valenti added to the existing conversation around how women are treated in public spaces – much of what she discussed was how women are treated on public transportation and other places, and I hate to say it but I’ve heard all this before. While it’s important to keep having this discussion, I would have liked something to be added to the conversation around progress (if that’s even a thing) … I don’t know. The best way to say it is that I personally didn’t get anything new from these parts of the book.

The personal stuff, though, I did like. I would have liked even more of it, to be honest, especially as this is a memoir. I like Valenti, I like her politics, I like her writing style, I like her attitude, and I would have liked learning even more about her than what she shared in the book. Although, to be fair, she did share a lot – from her childhood, to her experiences having two abortions, to her issues within her marriage, to being a woman who is working on her own confidence in the world and in her career, to being successful in both of those things, to being pregnant and raising a daughter – and I definitely enjoyed all of these parts of the book.

While I was disappointed about some aspects of Sex Object, overall I did appreciate the book and I’m glad that Valenti chose to write a memoir. I have to remind myself to continue following the work she’s doing now (I think she has a podcast and also writes for The Guardian) because she is one of the many smart voices in feminism right now, someone who is talking about uncomfortable but important topics. I would recommend this book for fans of Valenti who are looking to get to know her on a more personal level.