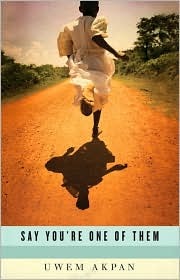 Say You’re One of Them by Uwem Akpan
Published by Little, Brown and Company

These two novellas and three short stories tell about life in five African countries from the perspectives of the children who are facing some of the most difficult crises of our time. An eight-year-old living in a shanty in Nairobi experiences his twelve-year-old sister selling her body to pay for the family’s most basic needs, such as food and school fees. A young girl in Ethiopia learns that she must cut ties with her best friend because of the religious wars going on all around her. A Muslim boy denounces his religion and attempts to pose as a Christian on a bus in Benin, headed for a distant relative’s home to escape religious persecution. Two young children in Nigeria have been orphaned by the AIDS crisis and are being sold by their uncle into slavery. And the last story, set in Rwanda, is about a young girl who watches her parents, on opposite sides of the conflict there, resort to the most devastating choices possible as a reaction to their circumstances.

I knew going into this book that it would be a brutal emotional roller coaster, and I was not wrong about that. These stories made me feel anger, frustration, rage, sadness, devastation, and horror at what the people in these stories were forced to endure and especially at the fact that these are real life situations that millions of children in the world have had to experience and, in some cases, are still experiencing. There is no milder way to say it other than that this book is heartbreaking and extremely difficult to get through. You have to put on an emotional thick skin in order to read this book, but once you do, it is definitely worth the pain. You can’t help but feel deep empathy for these characters while at the same time hoping and praying that the world will one day become a better place and people won’t have to suffer this way at some point in the future.

As far as my feelings about the individual novellas and stories, I have to be honest and say that I found the short stories more compelling than the novellas. I felt that in both novellas, the author was a bit meandering and the detail wasn’t quite enough for me to understand why those particular stories were chosen to be novellas and not short stories. There just wasn’t enough meat in these two, in my opinion, and I felt they would have both been better served had they been cut almost in half. That being said, the short stories were insanely good and I wanted more from each of these, which to me is the mark of a fantastic short story. The characters were extremely compelling, nuanced, and sympathetic, and I wanted to read more about them, to see how they were able to persevere despite their circumstances, long after I finished their stories. Of the five stories in this collection, it is the three short stories that have stayed in my brain space long after finishing the book, not the two novellas.