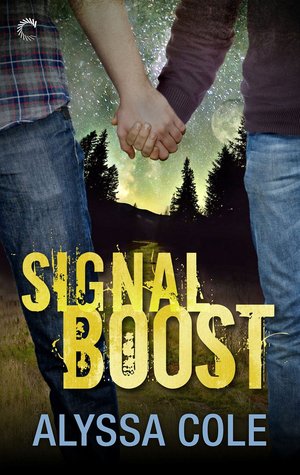 After something happened to make all technology stop working, John and his family have survived the apocalypse in their safe cabin with plenty of food and water, at least for a while. When a random guy, Mikhail, is caught raiding their garden, John’s parents offer him food and shelter in their home, while John finds himself rapidly developing a crush on this mysterious stranger. Mikhail reveals he’s on his way to a nearby university to find a professor he knows who may have some answers about why the world seems to be ending, and John decides to take up the adventure and accompany him on his journey. As they walk, they get to know each other, and their secrets come out in ways that bring them closer but have the scary consequence of showing their true colors, amidst the terror that is the new world in which they are living.

Signal Boost is the second book in Cole’s Off the Grid series, the first being Radio Silence, which I REALLY liked. The series is post-apocalyptic romance, which each book focusing on a different character and his/her romantic life. The first book featured John’s best friend, Arden, as she falls in love with John’s older brother, Gabriel, as the world is ending all around them. Signal Boost was unfortunately less successful for me than the first book. It provided enough entertainment, but it wasn’t as fun or sexy as the first book and I didn’t even get all that excited or into the explanations the author began to provide for how and why the apocalypse was happening.

I think the issue for me was that the book felt very meandering and sort of boring, although I hate to say that. John and Mikhail’s relationship started off with a spark and developed from there, so that part I liked and it felt authentic to me. But it was kind of boring, to be honest. It took so long for them to really get to know each other and so much of the book just felt like a waiting game for that to happen. I also didn’t love John as a character and Mikhail was honestly kind of clueless – when they got to the university and they started dealing with Mikhail’s former professor, without getting into any spoilers, I have to say that the story really went off the rails for me at that point.

What did I like? The science stuff and the reasons for the apocalypse was a welcome addition to the book, even though by the time it got going I was sort of annoyed and wasn’t as excited about these explanations as I wanted to be. I loved the fact that within the same series, there is so far a hetero romance and a LGBT romance (not sure what the third book entails). I like Cole’s writing and the way that she writes sex scenes I think is fantastic. Overall, this was not a bad romance at all just not what I was expecting since I liked the first book so much. I may or may not read the third one at this point.