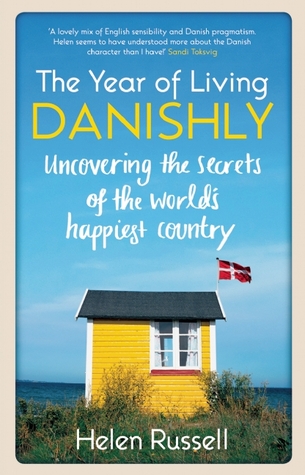 The Year of Living Danishly: My Twelve Months Unearthing the Secrets of the World’s Happiest Country by Helen Russell
Published by Icon Books

Helen Russell and her husband decide to move from their home in London, England to Denmark for one year in order for Russell’s husband to take a temporary job at Lego. While there, Helen spends the year trying to figure out what exactly makes the Danish people rank consistently among the happiest people on earth. She makes friends with many Danish people, meets with experts on happiness and well-being, and experiences everything Denmark has to offer in order to get a clear understanding of what exactly makes the Danish so darn happy.

I thought this book was a fun read and found it enjoyable overall. Some of the major things I learned was that the Danish are happy primarily because they spend a lot of time with family, they have very close social ties, their government provides a huge safety net against poverty, food insecurity, etc., and the culture is one in which trust is a tenant of any relationship, business or personal. That’s a very quick summary of what Russell learned but it covers the basics.

There is a lot of discussion in the book about taxes and about the balance between paying more in taxes and being happier. Denmark has one of the highest tax rates in the world with some Danes paying over 50% of their gross income in taxes, yet the Danish people see real impacts on their lives in exchange for the money they pay the government. Here in the US we are not exactly used to trusting the government to do the “right thing” with our tax dollars and most Americans typically want to pay less money in taxes, but the Danish welcome the high tax bill as they expect a safety net and other social programs in exchange for their tax dollars. It is a different way of thinking than what I am personally used to, and I am not sure this model could work in a country as large as the US (Denmark has just over 5 million people, about two-thirds the size of the population of New York City), but it is certainly something to think about.

I listened to the audio of the book, narrated by Lucy Price-Lewis, a new voice to me. She did a nice job with the narration – her light British accent was pleasant to listen to and she had the right inflections in her voice to match the tone of Russell’s writing. I would recommend the audiobook.

The Year of Living Danishly was an enjoyable experience and I thought it was pretty good overall. I’m not sure that the Danish lifestyle is for me – the dark, freezing cold winters alone make me lose interst – but there were certainly a few things I took from the book and I think everyone can learn a little something from a culture that values family and social ties so highly. At the very least, the book made me put a visit to Denmark on my bucket list.

7 thoughts on “The Year of Living Danishly by Helen Russell”