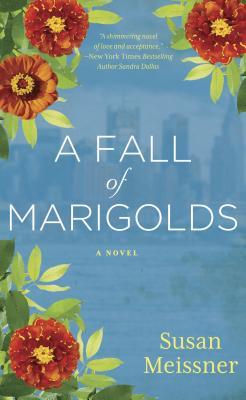 A Fall of Marigolds by Susan Meissner
Published by NAL

It’s been ten years since Taryn Michaels’ husband perished in the 9/11 attacks on the Twin Towers in New York City, and although she has attempted to put the pieces of her life back together, a photograph from that very day appears in a magazine and brings her right back to that moment. In the photograph, she’s wearing a scarf with a marigold pattern around her nose and mouth as she struggles to breathe through the smoke while running away from the collapsing towers. One hundred years prior to that, Clara Wood is a nurse on Ellis Island, repairing her heart from watching the love of her life perish in the Triangle Shirtwaist Fire when she meets a young immigrant who has lost his wife on the ship over to America. All the man has left of his wife is a scarf with a beautiful marigold pattern, so Clara makes the choice to smuggle some of his belongings out of his late wife’s suitcase, a decision that will have lasting consequences for both of them.

A Fall of Marigolds is a story about two women, both struggling with a tremendous amount of grief and unsure of how to move past the losses they’ve had to face. Clara’s story takes up the majority of the novel, but Taryn’s is no less crucial to the story and just as heartbreaking. I really loved getting to know both women and loved how Meissner wrote both of their stories as separate but intertwined in a subtle way.

At first, Clara was a difficult character for me to like. She is very naïve and believes that she was in love with a man whom she barely knew, and believed with zero evidence to back up this belief, that he was in love with her as well. Watching people she worked with and was friends with literally die before her, either by being burned alive or jumping to their deaths, was incredibly traumatizing and she was deeply affected by that horrific experience. But still, it seemed as though she was unlikely to move on from that, and she almost clung to the immigrant she met who lost his wife, perhaps because they had a shared feeling of grief they were both dealing with. All that being said, I ended up REALLY liking Clara and rooting for her. I realized that she was simply the product of a sheltered home environment and almost no experience with men or dating, so she really couldn’t be held responsible for her naivety. She goes through some major emotional changes in the book and really grows as a person, not just with moving on past the death of the man she loved but also in her own ability to understand the world around her, I just loved her character development. By the end of the book I was pro-Clara all the way, and was so excited to see things start to come together in her life.

Taryn, on the other hand, I rooted for from the very beginning. Her experience was not only traumatic, but she carried a ton of guilt along with her pain, as she was supposed to meet her husband in the Twin Towers that day (that’s why he was in the building in the first place). She felt that she played a role in his death; and what’s worse, she was pregnant at the time and didn’t get a chance to tell her husband he was going to be a father. While her sections of the book were fewer and shorter than Clara’s, her story was extremely compelling and I hoped desperately for some resolution to the pain and grief that she still felt ten years after her husband’s death.

Ultimately the way that Meissner brings the stories of these two women together is beautiful and gave just the right resolution to both of them. I really enjoyed the flow of this novel and how Meissner blended historical fiction with a contemporary story. This was my first novel by Susan Meissner but it will definitely not be my last.

2 thoughts on “A Fall of Marigolds by Susan Meissner”