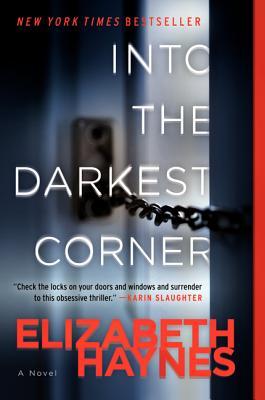 Into the Darkest Corner by Elizabeth Haynes
Published by Harper

When Catherine Bailey meets Lee Brightman, the two hit it off instantly and it seems to be a perfect match and the beginning of a great relationship. But soon their relationship turns volatile, with Lee acting jealous, telling Catherine what to do, calling her names, and downright terrifying her. Four years later, Catherine has moved, changed jobs, and is not in contact with Lee any longer. She finally begins opening herself up to the idea of a new relationship with her neighbor, Stuart, who encourages her to face her fears and move past the damage caused by her relationship with Lee. But one day she receives a phone call that threatens the peace she’s so carefully built for herself…

I didn’t read the publisher’s summary before picking up this book – simply chose to read it after hearing good things from other readers and knowing that it was, in general terms, a thriller. I had no idea it was about an abusive relationship – had I known, I may have passed on it because intimate partner violence is a subject that can be really difficult for me to read, having had personal experience with this type of relationship. That being said, this is an extremely well-written, well-plotted novel that I can sincerely recommend for those who can stomach its contents.

My personal experience aside, let’s talk about the book. So the beginning was difficult for me because the format goes back and forth in time between Catherine’s time being with Lee, four years ago, and Cathy in the present tense. At first I thought they were two separate people, but once I got that it was just two different time periods I was fine. Haynes’ decision to tell the story in this way was very smart; it kept me on my toes in both the past and present, and as the story went along and I got more of the Catherine/Lee dynamic, it heightened the tension for her situation in present tense, as it was clear that the abuse was likely to happen again if he were to find her.

The way that Haynes depicted the intimate partner violence that Catherine experienced was scarily true to life and written extremely well. The sense of isolation that Catherine felt, the constant need to explain herself to Lee, the constant name calling and physical abuse, the blaming of Catherine for when things didn’t go Lee’s way, these things were all within these pages and played out exactly how they do in real life abusive relationships. The saddest, most difficult part of the entire book for me was when Catherine did try to get help by reaching out to her friends and being honest with them about the relationship, and no one believed her. Lee was so manipulative that he had already convinced all of Catherine’s friends that any so-called problems in their relationship were her fault, not his. The way that this happened was depicted in such a true to life way that it was just heartbreaking to read as Catherine lost all hope for rescue or escape from the abuse Lee inflicted on her. It was really sad and honestly very scary that this happens to women in real life, all the time.

So would I recommend Into the Darkest Corner? Yes, but with reservations. Keep in mind that this is a book about an extremely abusive relationship, and is written extremely well – those who have experienced this type of situation themselves or have been close with someone who has could be triggered by the contents of the novel. If you are okay with that, however, I absolutely recommend the book – it is a tightly plotted, well-written and well characterized thriller, the perfect edge-of-your-seat novel.

4 thoughts on “Into the Darkest Corner by Elizabeth Haynes”