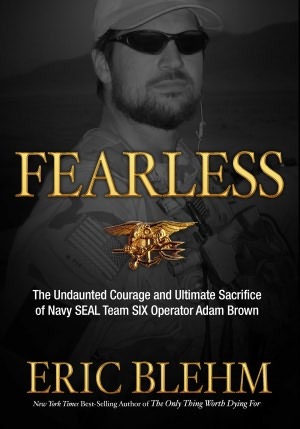 Fearless: The Historic Story of One Navy SEAL’s Sacrifice in the Hunt for Osama Bin Laden and the Unwavering Devotion of the Woman Who Loved Him by Eric Blehm
Published by The Doubleday Religious Publishing Group

Adam Brown had an interesting life, before and during the time he was in the military. He was a member of the SEAL Team Six (the guys who took down Osama Bin Laden) but tragically died about a year before the Bin Laden mission, on another valley at the base of a different mountain in Afghanistan, taking down other terrorists with his team. Brown was a guy who loved his family, friends, God, and his country, a guy who lived life to the extreme and made the most of every minute he had with the people he loved. He lived an exceptional life, although short, and his story is one that needs to be heard.

This was a book club book and to be honest, it’s not really my thing so I probably wouldn’t have read it if not for that reason. However, I found myself pleasantly surprised by how inspiring I found Adam Brown’s story. He was the typical popular kid all throughout school – football player, friends with everyone, you know the deal. After high school, though, he went down a dark path to drugs and became an addict. After attending several rehabs, he found Jesus Christ and that gave him the strength to get sober and look for a different path in life. He met a woman who later became his wife, got involved with his church, and decided to go to the military. During his training to become a SEAL, and while serving in the military, he lost an eye, almost lost his entire hand, and had countless debilitating injuries over the years. In fact, he was offered disability discharge with full retirement benefits about ten separate times but continued to refuse, as he wanted to fight for his country. He truly believed that was what he was put on this earth to do.

Adam Brown died defending his country from the same terrorists who were involved in 9/11, and based on everything I learned about him in this book, that’s exactly how he would have wanted to go. It was inspiring to read about someone so dedicated to something intangible, something outside of himself, and I was also inspired by his wife’s strength in the face of such difficult circumstances to be there for him and raise their children on her own after he died.

The one thing I had difficulty with in this book is the sheer volume of religion that is laced throughout the book. Christianity was a big part of Adam Brown’s life, but it did feel a bit preachy at times and I kept getting the message that if you’re not a believer in Jesus Christ, good luck accomplishing things because that is the secret ingredient to achieving your dreams and finding true happiness. As I don’t necessarily believe that myself, that message was a bit annoying to have to take while reading the book. And I think it bears being honest to say that because I did find this a very valuable story, super inspiring, and one that I think needs to be told. Unfortunately I think the religious aspect of the book will be a turn off for a fair amount of readers, which is a shame.

If you’re into inspiring stories, heroism, especially as it relates to the military, this is a fantastic choice. While I’m not super into military books, I still found Adam Brown’s story really interesting and was inspired by a lot of what I read here. Definitely give the book a chance, and maybe you’ll surprise yourself with genuinely enjoying it, as I did.

1 thought on “Fearless: The Historic Story of One Navy SEAL’s Sacrifice in the Hunt for Osama Bin Laden and the Unwavering Devotion of the Woman Who Loved Him by Eric Blehm”