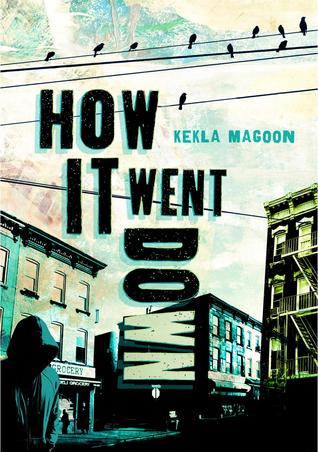 How It Went Down by Kekla Magoon
Published by Henry Holt and Co.

Sixteen-year-old Tariq Johnson is shot and killed in his neighborhood while leaving a convenience store, in full view of several friends and acquaintances. His shocking death rattles his friends and family, and as his community tries to piece together what happened that day, different people have different opinions and notions about what they think they saw that day, and what kind of person Tariq really was. This novel is told from the perspective of several of his friends, a few acquaintances, his mother, his grandmother, and his sister, and it becomes clear as the book goes on that no one really has the full picture of how it went down that day.

This book is tough, guys. Kids being killed for no apparent reason – hell, anyone getting killed for ANY reason – is a really difficult subject. The subject itself is rough but add to the subject matter what’s going on now with KKK members and Nazis marching in Charlottesville, people being killed for opposing the obvious hatred and bigotry we saw there – it’s just heavy, guys. My heart is just so heavy these days.

But anyway, back to the book. How It Went Down is fantastic although so difficult to read. The way that Magoon is able to show these different perspectives of an incident that took seconds to occur, and how each person who was present saw things differently, people who weren’t there have Very Strong Opinions about what happened to Tariq, it’s just so true to life when these horrific things happen to real people.

Do I recommend this book? Yes, but with severe reservations. It’s done extremely well, the characters are vivid and true to life and nuanced and not one character is a “good guy” or a “bad guy”. Magoon created such realness within these pages, so much truth and genuine emotions. But it’s tough, because sometimes things like this happen in real life, and there are no answers as to why, and people have to live with the fact that their brother or son or best friend or sister or mother died and there’s no real explanation for it. How It Went Down is wonderfully done but oh so painful to read.

6 thoughts on “How It Went Down by Kekla Magoon”