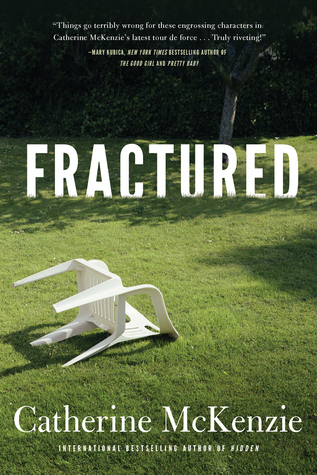 Julie, her husband, and their twin six-year-olds have recently moved across the country to Cincinnati from the Pacific Northwest to escape a woman who stalked Julie after she wrote a novel that gave her celebrity status. Feeling lonely and trying unsuccessfully to write her second novel, Julie befriends the neighbor across the street, John, who is home all day after recently losing his job. John’s wife, Hanna, is understandably wary of this friendship, as is Julie’s husband Daniel, but the two persist as running buddies anyway. Pretty soon Julie begins to understand that this neighborhood is more clique-y than she could have imagined, as the queen bee of the block, Cynthia, begins actively campaigning to turn the entire neighborhood against Julie and her family. In addition, creepy things start happening that give her reason to believe that her stalker might have tracked her down to Ohio and could be at it again.

Fractured was a fun read that was entertaining and enjoyable, if a little predictable at times. I have never lived in a neighborhood quite like the one Julie and her family moved into, but oh the drama! These people were dramatic to the point of being silly, but I have to admit that it was fun to read about. The way McKenzie described their block parties, the rules posted to their community online message board, and the interactions between those families who couldn’t get along was just hilarious. One thing I didn’t love was that most of the drama was instigated and perpetuated by the women on the block – mostly stay-at-home moms who “didn’t have anything better to do” – which was annoyingly stereotypical and got old after a while. The men on the street had almost zero personalities and their characters were barely discussed, much less fleshed out in any real way. But I get it – suburban drama, focused on the women, okay fine.

The way McKenzie tells the story is nonlinear, mostly telling it as flashbacks and going back and forth between the point of views of Julie and John, with little snapshots of what’s currently happening, slowly bringing the two time periods together until the conclusion, where everything along both timelines makes sense. This set up definitely increased the anxiety factor, as the reader can see that something BAD happened, but is completely in the dark as to what that could be. And is it Julie’s stalker who did the bad thing? Or another character entirely? Is Julie’s stalker even back or is someone else on the street stalking her? Or is she even being stalked at all, could she possibly be making it up? These questions and more swirl around the story, making it impossible to put the book down because you just have to keep reading to find out what’s really going on here.

I enjoyed Fractured for what it was – a fun novel that I would categorize as suburban thriller. Is that a category? That’s the best way to describe the book for sure. I can see myself reading more from this author because while I didn’t love every aspect of the book, she can definitely write a page-turning story that really kept me on the hook.

4 thoughts on “Fractured by Catherine McKenzie”