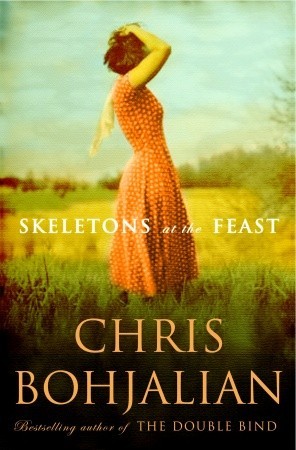 Skeletons at the Feast by Chris Bohjalian
Published by Crown

The Second World War is coming to a close when we meet the characters in this novel. Anna Emmerich is the daughter of Prussian aristocrats and she and her family, along with thousands of other German citizens, are on the run from the Russian army, hoping to make it to the safety of the British and American lines. Anna and her family are accompanied by her lover Callum, a Scottish prisoner of war, technically their prisoner in a way, who also doesn’t want to get caught by the Russians. Manfred, real name Uri, a Jew who jumped from one of the trains and has disguised himself as a Nazi soldier for the past few years, befriends them and accompanies the family on their journey. We are also introduced to Cecile and the other women in the concentration camp with her, as they endure a death march away from their camp with their jailers in tow. This cast of characters comes together in such a way that is heartbreaking and breathtaking all at once.

This might just be my favorite Bohjalian yet. It never fails that every single time I think to myself that I am “over” books about the Holocaust, I read another one that shocks me, breaks my heart, and draws out an intense emotional connection to the characters and the story. Skeletons at the Feast did all of those things and more. What I loved about this book is that we see the nuances in people who were on all sides of this war – Anna’s family believed in the “bad guys” and truly believed that what Hitler was doing was right. But Anna is a good person, she has a good heart, and her parents are not terrible people, either – they are just misguided, brainwashed, a little too comfortable with their prosperity and station in life. When Hitler promises them wealth, power, and happiness, they look at it as a way to maintain their status quo, and completely turn a blind eye to what he does to the Jews. There were so many parts in the book where they simply refused to believe what their government was doing, thought it was lies or nonsense or propaganda, and continued to support Hitler despite everything they knew in their hearts to be true.

Anna’s family is one example of how Bohjalian shows the reader the intricacies and details of real humans dealing with the most dire, desperate, inhuman of circumstances. He shows the reader how despite everything, these people still chose to love, still chose to help others, still chose to find the good in the absolute worst, most miserable, most devastating times life can possibly become for people. The sheer humanity found within these pages took my breath away and I couldn’t stop furiously reading, wanting more and more from these characters and this story, despite how utterly horrifying it was.

I cannot say enough how much I absolutely loved this book, although it broke me in so many ways, I thought it was such an incredible read. I will keep reading Bohjalian as long as I can find more of his novels to voraciously consume.

4 thoughts on “Skeletons at the Feast by Chris Bohjalian”