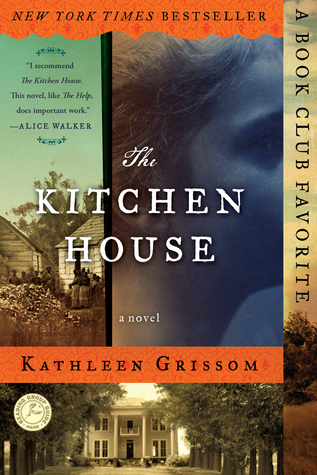 The Kitchen House by Kathleen Grissom
Published by Touchstone

Lavinia is a seven-year-old Irish immigrant who, after being orphaned on the ship over to the US, is taken in by a plantation owner and raised among the slaves as if she were a member of their family. The novel starts out by introducing the reader to Lavinia, the family of slaves who she grows up feeling as though they’re her parents, brothers, sisters, etc., and the white family who own the plantation. Quickly, though, the book ratchets up its pace and a LOT happens. There is abuse, affairs, MASSIVE power dynamics, questions about race, humans owning other humans, all of the typical stuff you see in novels set during slave times, but at its core, this is a book about two families – one white, one black – and one girl who must navigate between these two totally separate worlds.

I really enjoyed The Kitchen House and I find it remarkable what Grissom managed to do with these characters throughout this novel. The book spans about twenty years, and so much happens to the characters, but she really gives the reader a complete understanding of who they are, what their motivations are, who and what they love and will fight for, and why they make the decisions they make throughout the book. I found it interesting that while the book focuses on Lavinia as its center, she was the character I found myself caring about least. Instead, I was much more drawn to her family, the slaves, and the various struggles and issues they had to deal with. Grissom did such an amazing job bringing these characters to life on the page – especially Belle, Laviania’s older “sister” who is actually the illegitimate daughter of the plantation owner. I loved Belle and was disappointed that, while she narrates a few of the chapters, her sections were not long enough for my tastes.

While some of the events in the book would fall into the stereotypical for a slavery novel category, I would venture to say that these things (whippings, children being sold away from their parents, slaves being forced to marry whoever the overseer wanted them to marry, physical abuse, rape, I could go on and on…) are stereotypical because they happened all the time. So in my uneducated brain, Grissom stayed very true to history, and there’s even a note in the back about all of the research that she did and the factual story that the novel was based on. So while the book was tough to read at times, historical fiction can and should be tough to read, and I thought Grissom did an amazing job weaving the elements of life as a slave in with the humanity of the people who actually did experience that awful existence.

This was a book club pick and universally everyone liked the book, although to varying degrees. We had a good discussion about some of the questions the book brought up in our thoughts, a good conversation about power dynamics and how lack of power contributed to many of the characters’ choices, and overall it was a great book club pick.

I honestly have nothing negative to say about this one. The Kitchen House was fantastic.

4 thoughts on “The Kitchen House by Kathleen Grissom”