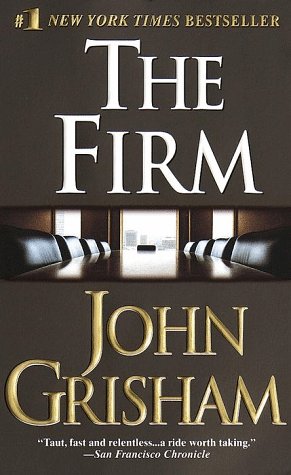 The Firm by John Grisham
Published by Dell

It’s possible that I’m one of the few voracious readers who had never read anything by John Grisham up until this point. I always expected not to like his books as the idea of a legal thriller just doesn’t sound, I guess, thrilling to me in the least. However, when a coworker recommended that I try his books, and further suggested starting with The Firm, I decided to listen. I didn’t hate the book but I didn’t enjoy it too much, either. It was just okay for me. The writing is super detailed and over dramatized to the point where it became annoying after a couple hundred pages. The entire thing is dripping with the grossest sexism and is just not nice in its treatment of women in any way. I get that the sexism is characteristic of the firm itself and it was there for a reason, but I don’t think it had to be SO in your face and, honestly, just obnoxious. While I don’t see myself reading another Grisham novel anytime soon, I would be interested to see if all of his books are written with so little attention paid to how the women are represented in them, or if it is unique to this book because of the premise.

Despite my issues with the book, it wasn’t the worst ever and I did find myself entertained by the story itself. I wouldn’t exactly call it a thriller but the plot moved quickly enough to hold my attention and keep me turning pages. I kind of hated most of the characters, but I think that was what Grisham was going for, and the fact that he got me to care enough to hate them is a good thing. I am glad that, having read the book, I now understand what Grisham is all about and I know I won’t be reading more of his novels in the future.

4 thoughts on “The Firm by John Grisham”