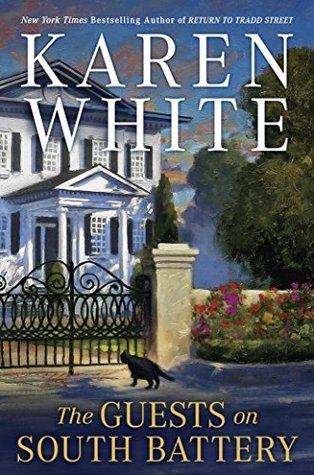 With her extended maternity leave at its end, Melanie Trenholm is less than thrilled to leave her new husband and beautiful twins to return to work, especially when she’s awoken by a phone call with no voice on the other end—and the uneasy feeling that the ghostly apparitions that have stayed silent for more than a year are about to invade her life once more.

But her return to the realty office goes better than she could have hoped, with a new client eager to sell the home she recently inherited on South Battery. Most would treasure living in one of the grandest old homes in the famous historic district of Charleston, but Jayne Smith would rather sell hers as soon as possible, guaranteeing Melanie a quick commission.

Despite her stroke of luck, Melanie can’t deny that spirits—both malevolent and benign—have started to show themselves to her again. One is shrouded from sight, but appears whenever Jayne is near. Another arrives when an old cistern is discovered in Melanie’s backyard on Tradd Street.

Melanie knows nothing good can come from unearthing the past. But some secrets refuse to stay buried….

So. You guys know I’m a Karen White fangirl, right? Especially the Tradd Street series – I have loved watching Melanie solve mysteries as she uses her powers of talking to ghosts to understand long-buried family secrets and drama, as well as watching as she slowly fell in love with Jack Trenholm, denied that love to herself, then watched with glee as he loved her back and they lived happily ever after. So fun, right?! So you’d think that another volume of the same stuff would be music to my ears, yes? I thought the same thing. Unfortunately, The Guests on South Battery was just okay to me and I’m left wondering if maybe I’m done with the series and I should leave Melanie and Jack in the happily ever after stage of my brain.

I honestly got super annoyed with Melanie. She’s just so oblivious to so many things – like the fact that she gained weight while pregnant and never really lost any of it (who cares, honestly, but everyone around her seemed to want to point it out and she either ignored them or really didn’t see it herself, either way is fine, but it was an annoying aspect of the book). She is suspicious of Jack’s every move and always concerned that he’s going to leave her – almost like she can still not let herself believe that this man loves her. He MARRIED you and the two of you have two children together – I wanted her, at some point, to just trust this guy and let go, to love him with her whole heart instead of continuing to hold back. It aggravated me to no end.

The mystery part of the book I actually quite enjoyed. It had to do with a house haunted by a mother and daughter, people who Melanie’s mother Ginnette knew when she was much younger. The mother, Anna, was a terrifying ghost and this continues to be one of the reasons I read these books – I love how Karen White makes these ghost stories scary-ish but still a lot of fun. That element of creepiness was definitely there, but it is done with a light touch. I have to admit that when the secrets these ghosts were keeping were revealed, there were really no surprises to me, but still I enjoyed this part of the story.

I enjoyed this book to a degree, but on the other hand, Melanie in general is just beginning to grate on my nerves. I’m not sure I’ll continue with these books if White keeps writing them, unless I hear somehow that Melanie’s personality drastically changes in the next novel (not likely). I’m okay with enjoying the first few books in the series and just leaving it alone after that. I’d still recommend the series, for sure – but perhaps I’d suggest reading the first four and stopping there.

2 thoughts on “The Guests on South Battery by Karen White”