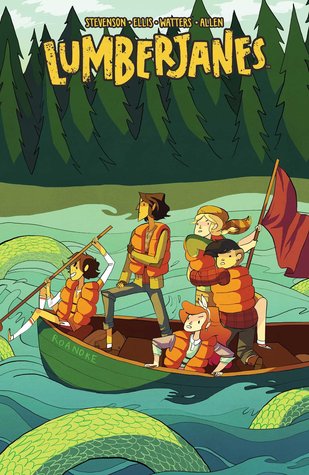 The third installment of the fun and feisty comic Lumberjanes has Mal and Molly going on a date (yay!) and being interrupted by none other than the Bear Woman. Meanwhile, back at camp, Jo, April and Ripley are focused on earning every badge they possibly can (and these badges are ridiculous).

This was my favorite of the series yet. I loooooooved seeing the character development here, especially between Mal and Molly – both individually and as a couple. I loved seeing the two of them separate from the rest of the group, how they navigated the craziness that was thrown at them in a particular way that only the two of them together could have done. I also quite enjoyed the silliness of the tasks the other girls were trying to complete for the most random, odd-ball badges ever. It was hilarious and fun to read and the adventures in this book were more exciting than some of the previous ones, I thought. I REALLY liked this volume in particular, but the series as a whole is just tons of fun.

Lumberjanes, Vol 4: Out of Time by Noelle Stevenson, Shannon Watters, and Carolyn Nowak
Published by BOOM!Box

This volume focused more on Jen than it does the campers – it starts with Jen trying to teach the girls basic survival skills, until a mysterious blizzard hits camp, Jen is separated from the group, and a taxidermist who says she has all the answers “saves” her. Jen quickly realizes that this person is not the safe place she claims to be, and she must save the day and find her way back to the campers.

I really enjoyed the focus on Jen in this volume, as she’s a character that has only really gotten development through the eyes of the other characters. This one was a chance for her to come into her own and show the reader more of her personality. There was also more in terms of getting the back story of the camp and of Rosie’s past. I liked this volume a lot even though it wasn’t my absolute favorite of the series, it brought development to the story and held my attention big time. This series is great; seriously, if you’re not reading it, you need to start now.