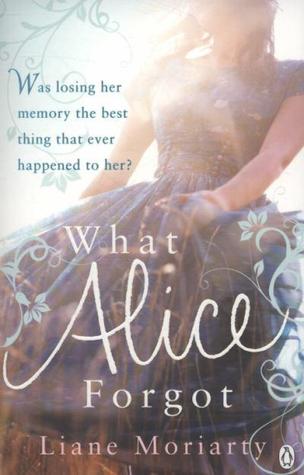 What Alice Forgot by Liane Moriarty
Published by PanMacmillan Australia

Alice Love is twenty-nine, crazy about her husband, and pregnant with her first child.

So imagine Alice’s surprise when she comes to on the floor of a gym and is whisked off to the hospital where she discovers the honeymoon is truly over — she’s getting divorced, she has three kids and she’s actually 39 years old. Alice must reconstruct the events of a lost decade, and find out whether it’s possible to reconstruct her life at the same time. She has to figure out why her sister hardly talks to her, and how is it that she’s become one of those super skinny moms with really expensive clothes.

Ultimately, Alice must discover whether forgetting is a blessing or a curse, and whether it’s possible to start over.

Okay, so Liane Moriarty can do no wrong. Every time I read one of her novels I find myself saying, “now THIS one is my favorite of hers!” only to remember that I keep saying that … turns out they are all pretty awesome, including What Alice Forgot.

What is interesting about this novel is that Alice is almost an unreliable narrator, a thing I like a lot in books, but her unreliability is far from intentional. In fact, throughout the book it is clear that she’d like very much to be a reliable source on her own life, but that simply isn’t possible, what with the amnesia and all. What this does to the reader is forces you to get to know Alice through the eyes of people who know her as well as what she’s telling you about her thoughts and feelings and find a way to sort of pair those two things together to come up with a complete picture of this character who doesn’t even know herself. It was strange and interesting and made the novel a ton of fun to read.

I liked her so much, though! As I continued to read the novel and piece together aspects of her life and personality, I continued to like her more and more. I continued to feel empathy for her situation and hope desperately that things would work out in her favor – although what that meant exactly was unclear for most of the book.

Moriarty does an amazing job at giving the reader hints and clues throughout a novel that slowly get at the real picture of what’s going on without revealing too much, too soon. She excels at this particularly in What Alice Forgot, because since Alice doesn’t remember the big events that made up her life for the past ten years, neither does the reader have that information. Slowly, as Alice remembers things and as her family fills in the details, the reader gets to fill in the gaps right alongside her. There were frustrating moments when I just wanted someone to TELL me about a particular person or situation, but I loved that because it truly got me inside Alice’s head and I understood exactly how she felt – the immense frustration at not knowing your own life, can you imagine? Moriarty did this SO well.

I really loved What Alice Forgot. Moriarty crafted an intense, compelling and ultimately heartwarming story featuring a flawed but very real and wonderful character in Alice. I will continue to be here for whatever Moriarty wants to deliver.

2 thoughts on “What Alice Forgot by Liane Moriarty”