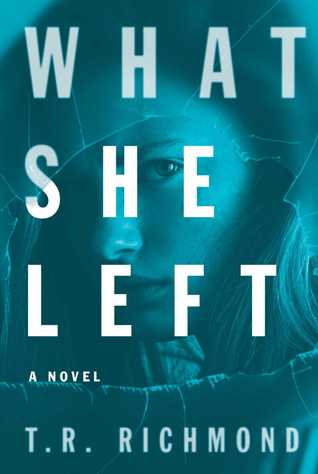 What She Left by T.R. Richmond
Published by Simon & Schuster
Review copy provided by the publisher

On a snowy February morning, the body of twenty-five-year-old journalist Alice Salmon washes up on a riverbank south of London. The sudden, shocking death of this beloved local girl becomes a media sensation, and those who knew her struggle to understand what happened to lively, smart, and savvy Alice Salmon. Was it suicide? A tragic accident? Or…murder?

Professor Jeremy Cooke, known around campus as Old Cookie, is an anthropologist nearing the end of his unremarkable academic career. Alice is his former student, and the object of his unhealthy obsession. After her death, he embarks on a final project—a book documenting Alice’s life through the digital and paper trails that survive her: her diaries, letters, Facebook posts, Tweets, and text messages. He collects news articles by and about her; he transcribes old voicemails; he interviews her friends, family, and boyfriends.

Bit by bit, the real Alice—a complicated and vulnerable young woman—springs fully formed from the pages of Cookie’s book…along with a labyrinth of misunderstandings, lies, and secrets that cast suspicion on everyone in her circle—including Jeremy himself.

Don’t you hate when you go into a book expecting something great and it’s just … okay? When you are excited about a book that turns into a let-down? It’s the WORST. And for me, that’s what happened here. While there were things I enjoyed about What She Left, overall I really did not like the book.

I didn’t dislike everything about this novel. I was interested by the structure – it’s told in letters, diaries, Facebook posts, Tweets, etc. All of these elements individually tell small pieces of Alice’s life, and they come together in the end to reveal what really happened to her and what secrets she (and those around her) had been keeping. Also, the character of Jeremy Cooke was sufficiently creepy and definitely fit the bill of unreliable narrator (something I enjoy). I thought Richmond did a good job crafting his character, making him someone that I needed to trust to give me the truth, but couldn’t possibly trust because he was just a bit off. I didn’t like Jeremy as a character, but I believed him in his unreliability.

What didn’t I like about the book? Pretty much everything else. Alice herself was not a likable character to me at ALL. While I don’t have to like the characters in books – in fact, disliking them is sometimes better and more interesting – in this case I just couldn’t get myself to care about her. I was supposed to be invested in the truth of what happened to her, in finally learning her entire story, and it did not matter to me one bit. I had to force myself to keep reading, to find out the truth. And once it was revealed I was not emotionally invested in Alice enough to be shocked or sad or anything. I was just “meh” about her and the whole story.

Also I feel like the author threw a lot of curve balls into the story that may not have been necessary. Or the way they were handled could have been the problem, I’m not sure which. It was like – here’s this huge shocker! but it’s buried inside a letter that talks about ten other things, so pay attention to it, but not TOO much attention because it’s not a big deal – like that kind of random, weird reveal stuff and I just didn’t get it.

I don’t know. At times I found the book suspenseful, but mostly it felt rambly and a bit plodding and just not something I got into. For a book that isn’t very long it felt really, super long and I wanted to give up many times while reading it. Perhaps this would be a more successful book for another reader, but I am not that reader.

9 thoughts on “What She Left by T.R. Richmond”