Linda Wallheim, devout Mormon, wife of the Bishop, and mother of five, finds herself increasingly involved in the disappearance of a woman in her community, Carrie Helm, who left her husband and young daughter behind. As Linda gets deeper into her own investigation of Carrie’s husband, Jared, she comes to the conclusion that he must have murdered his wife. Although Linda’s husband has asked her to stay out of it, she can’t help feeling for Carrie as she learns more about her life with Jared, and gets pulled closer emotionally to Carrie’s young daughter. She’s pulled between her duty to her husband and church, and what she feels as her duty as a woman to help uncover the truth behind Carrie’s disappearance.

I didn’t grow up around the Mormon church, so everything I know about the religion has been from books, movies and TV, so I have no background upon which to judge if Harrison’s depiction of Mormon life in this book is accurate. That being said, The Bishop’s Wife was pretty darn entertaining and it certainly felt relatively realistic. I’m not a huge fan of when women feel that they have to defer to their husband’s wishes, whether because of religion, culture, or another reason, but I felt that Harrison did a nice job depicting the internal struggle of a woman for which that was the expectation, but she was pulled to do differently by her own conscience. The mystery kept me turning pages and I didn’t guess what really happened until close to the reveal at the end. I’m not sure I loved it enough to continue with this series, but this book was certainly enjoyable. 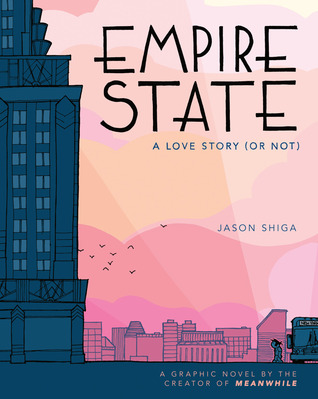 Empire State: A Love Story (or Not) by Jason Shiga
Published by Harry N. Abrams

Jimmy lives in Oakland, California, with his parents, has few friends, and works in the library. Sara is his best friend, but has bigger dreams for herself than what Jimmy imagines his own life to be. When Sara moves to New York City, Jimmy decides to finally get the courage to tell her his real feelings and arranges a Sleepless in Seattle style meetup at the Empire State Building. His trip to New York is exciting and scary, but what’s scarier is what he discovers when he gets there – Sara has a boyfriend.

This was a cute graphic novel that was an easy, fun way to spend an afternoon. I loved the nerdy way Jimmy responded to the world around him and there were some laugh-out-loud moments during his time traveling to New York. The illustrations were well done and I liked the simplicity of them. I enjoyed Empire State and would recommend it for a quick, light read.

This sequel to the incredibly funny and surprisingly heartfelt Crazy Rich Asians brings back Rachel Chu and Nicholas Young just as they’re about to get married. Rachel is sad that her estranged father won’t be able to walk her down the aisle, until she learns that she might be able to forge a relationship with him after all.

I hugely enjoyed Crazy Rich Asians so I was definitely looking forward to this book. Overall it was almost as fun as the first, and I’m still looking forward to whatever Kevin Kwan does next. This book was a bit sillier than the first, and a little less poignant, but still really fun and a highly amusing read. I love these characters, how they are just insanely spoiled rotten and so disgustingly rich, but on the inside they have problems just like the rest of us. My favorite moments throughout these books is when the humanity of these crazy rich Asians shows through their glitz and glamour. China Rich Girlfriend was a really fun read and a must-read for anyone who loved the first book in the series!