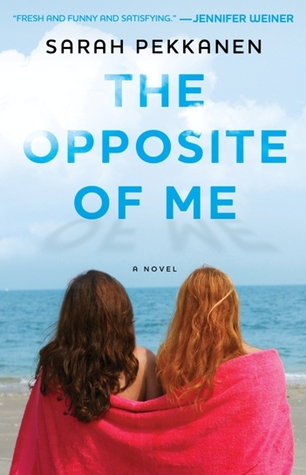 Twins Lindsey and Alex have always been opposites: Lindsey the “smart” one and Alex the “beautiful” one (at least, according to Lindsey). But when Lindsey’s high-powered life in New York City crumbles around her, she returns to her family home in Maryland to help with the preparations for Alex’s wedding – an event she is not looking forward to one bit. When a family secret comes out, both Lindsey and Alex must reexamine who they are in their family dynamic and come to see that maybe they’re not such opposites after all.

I was attracted to this book because I’ve enjoyed Pekkanen’s in the past and also because I have a sister. I’m not a twin, but my sister and I are about as different as can be and weren’t super close growing up (although now we are). I enjoyed it, although I had a difficult time relating to Lindsey as a character. I found her very self-absorbed and unable (or unwilling) to have empathy for anyone, especially her sister. She had such a difficult time seeing things from any perspective other than her own to a point that it was almost unrealistic. But there was definite growth in her character, which I really appreciated – she grew up over the course of the novel, which is something I always like to see.

I did also appreciate the way the book made me think about career vs. family, money vs. success, as in – what is the definition of success? If a person is working sixty plus hours a week, not sleeping, not spending time with family and friends, but making a lot of money and climbing the corporate ladder quickly, is that considered success? To me, it’s not, but I have to admit to getting wrapped up in my own work drama and corporate culture too often. I need to more regularly step back and evaluate my priorities and remember to focus on what really matters in life – my relationships with my spouse, family, and friends and all the good things that come from those relationships, that’s what’s important. To me, anyway.

So this was an enjoyable read and I did like what Pekkanen did with the ending, how she wrapped things up for these characters. I’ve liked a couple of her other books more than this one but she is still a solid women’s fiction author to me. I’ll keep reading her books!

As a sidenote – I actually hate the term “women’s fiction” but I am not sure there’s another way of describing this type of book that doesn’t make it sound like ONLY women can/want to read it. In reality, these are books primarily written by women, about women, and read mostly by women. Does anyone know a better way of saying this?

6 thoughts on “The Opposite of Me by Sarah Pekkanen”