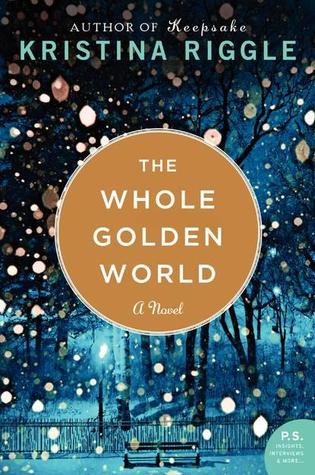 This novel begins in a courtroom as high school teacher TJ Hill stands accused of having an affair with his seventeen-year-old student, Morgan. Morgan’s parents, Dinah and Joe, are shocked when Morgan walks into the courtroom and ignores them in favor of sitting behind TJ in support. Told from the points of view of Morgan, Dinah, and TJ’s wife, Rain, The Whole Golden World handles an extremely delicate and complex issue with maturity and finesse.

Wow. This book is something else. You would think it would be difficult to write a book about a teacher having a sexual relationship with a student and make not only the student, but also the teacher’s wife, be complex characters the reader can really sympathize with and understand. Well, Riggle accomplished that and more with this novel.

Don’t get me wrong, there’s no gray area here, what TJ does is wrong: he clearly took advantage of Morgan, despite what Morgan thinks for most of the book, but Riggle paints the picture in such a way that the reader can see, from Morgan’s perspective, how a teenager could believe that this is a real relationship. She made Morgan such a sympathetic and realistic teen and got in her head to such a degree that it becomes perfectly understandable why Morgan would think that what she was doing with her teacher was appropriate and okay (nevermind the legality of it – that was a whole other issue).

I don’t know who I felt more sorry for, Morgan or Rain. In the end I would have to say Morgan’s eventual realization of what TJ was doing to her – and how he was able to manipulate her – was more heartbreaking than Rain’s discovery of the truth about her husband. But this is just one of those books where no one really has it easy; truth has to come out and people have to grow from their awful experiences. Morgan’s mother, Dinah, has an incredibly rough time in the novel too – her daughter was involved with a teacher and she had no idea, imagine how that must tear apart a mother’s conscience. How could this have happened without Dinah’s knowledge or even an idea that something out of the ordinary was happening in her daughter’s life? I think the book is an excellent reflection of how teenagers can be so good at concealing things from their parents and other authority figures when they really want to – it forces parents to question whether they really do know what they think they know about their teens.

The Whole Golden World is just such a great novel. It deals with an issue that you’d think is black-and-white, but treats it with such respect and truthfulness to make it as complicated and messy as life truly can be. Highly recommended.

1 thought on “The Whole Golden World by Kristina Riggle”