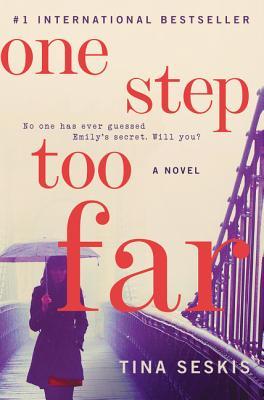 On the surface, Emily Coleman appears to have it all. Great marriage, job, home, the whole nine yards. Yet one morning, she simply abandons her life and begins a new one, leaving her home in the suburbs for the city of London, changing her name to Cat and rooming in a house full of strangers, and even getting a new job as a receptionist. Obviously Emily is running from something, and she’s convinced herself that her new identity will make the past disappear. But the truth has a way of catching up to people, and Cat won’t be able to run from her demons forever – the question is, just how far will she be able to take this thing?

This book drew me in immediately. You know as a reader that something huge happened to Emily, she’s definitely running from something, but you have no idea what for almost all of the book. The suspense that this situation created cannot be explained, except to say that Seskis took this angle and just ran with it, and did such an excellent job at keeping the tension super-high throughout the entire book. I was on pins and needles while reading the novel, and found it incredibly hard to put down.

I am not quite sure what to make of Emily/Cat. At times she really pissed me off. As I was in the dark about what she was running from, I couldn’t really form an opinion on whether her choice to leave was “valid” or not, but I could feel strongly that she was making bad choices in her new life (which I did). No matter what the situation is, doing drugs and partying and associating with pretty shady characters certainly isn’t going to solve anyone’s problems. So that was difficult for me, but at the same time, I got that Cat was trying to shed her old identity completely, and in doing so she just went full steam ahead, making choices that Emily would never, in her wildest dreams, have considered. But it was still kind of hard to read – like a train wreck that you can’t look away from but wish wasn’t happening.

There’s one thing about this book that really bothered me, and I don’t want to spoil too much, but I have to say this – I really, truly thought there was going to be more to the sister situation than there was. True, she ended up being involved in the big situation that caused Emily to flee, but I felt like Seskis took the reader down a path that didn’t end up being anything at all. I was imagining all kinds of things – the sister wasn’t real, she killed the sister, the sister killed her, she IS the sister, just so many things, none of which ended up being even close to the truth. It felt kind of like manipulation. I don’t know, am I the only one who was bothered by this?

In the end. the big reveal was just as juicy and insane and terribly sad as the book promised, and I was super satisfied with how the whole thing turned out. I very much liked this book and will definitely read more from Seskis. I was highly impressed by this debut novel and I see big things for this author’s future!

6 thoughts on “One Step Too Far by Tina Seskis”