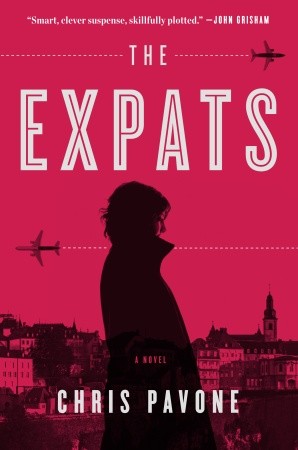 The Expats by Chris Pavone
Published by Crown, an imprint of Random House

Kate Moore quit her (secret, even from her husband) gig as CIA agent when her husband’s job gave them the opportunity to move to Luxembourg for a year. And even though Kate’s life in Luxembourg consists of play dates, coffee with other expat moms, and weekend trips to beautiful cities in Europe, she can’t detach herself fully from her spy roots. She is distrustful of everyone, and she begins to think that the American couple she and her husband have become close with are not who they say they are, so she starts to investigate them. What she finds causes her to turn her suspicions on her own husband, and the more she learns the more she realizes she isn’t the only one who’s been keeping secrets all these years.

The Expats was another book club pick that I wouldn’t have chosen to read on my own, and yet another time when I remembered to be thankful for my book clubs. I was highly entertained by this novel and truly had a difficult time putting it down. The twists and turns Pavone takes the reader on start right from the beginning and don’t end until the final page is turned. The book is really plot-driven, which I loved, but the characters are still developed enough to make me interested in them. A winning combination, at least to me.

It’s difficult for me to say too much about this book because SO much of it is about the plot, and to say anything specific about the plot would spoil what makes the novel so great. I definitely wasn’t expecting everything that happened, and what I loved about it is that Pavone truly made the novel an adventure to read. My mind was spinning while reading, trying to stay a step ahead of Kate and figure out what she was trying desperately to figure out, but I just couldn’t get there. It was only at the very end, when everything comes together, when Kate finally learns the truth, that I also had the ah-ha moment Pavone handed to me. And there’s even one last thing, a secret that Kate has been keeping from the reader, that hit me like a smack in the face when it was revealed. It was a great moment and an excellent ending.

I don’t know what else to say other than The Expats was pure entertainment for me. I truly enjoyed it and it was exactly the type of novel I needed when I read it. If you’re looking for an, exciting, twisty book chock-full of plot, look no further than The Expats.

6 thoughts on “The Expats by Chris Pavone”