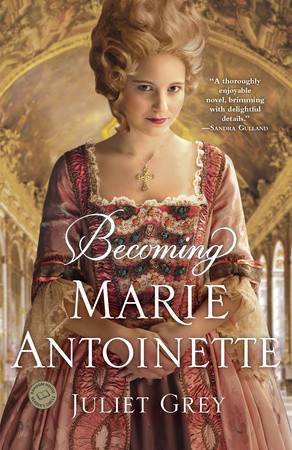 Before Marie Antoinette became THE Marie Antoinette she was a ten-year-old Austrian girl by the name of Maria Antonia, who was raised by an empress with serious political ambitions. Antonia learns at a young age that she will be married off to the dauphin of France, Louis XVI, and it is her job to make sure that not only her betrothed falls in love with her, but the entire country of France does as well.

Why did I put off reading this book for so long? Everyone told me that Becoming Marie Antoinette was captivating, well-written historical fiction, and now I see that they were right! I fell in love with the young Marie Antoinette while reading her story, and I couldn’t put this book down. It was so lovely!

The main reason I was so enthralled with this book was the character of Antonia, or Marie Antoinette, herself. The novel starts when she is a very young child, so the reader gets an inside look at what it might be like to have so much incredible pressure placed on such a young girl’s shoulders. Grey wrote her to be an incredibly mature young woman, but at the same time she was innocent of so much about life and it showed in many of her actions and decisions. She was a picture of grace when she arrived in France, but there was still so much she didn’t understand about her new surroundings and the power that came with her new place in the world.

Grey does a good job balancing the political events of the time with the personal stuff that’s going on with Marie Antoinette and her loved ones near and far. I felt like I was pulled into her life, but also that I was getting a mini-history lesson at the same time. Perfect historical fiction, in my opinion.

I liked this one so much that I went out and purchased the second in the series immediately upon finishing it! And to be honest, I don’t buy a lot of books (I’m a library girl). So that should tell you something.

Becoming Marie Antoinette was a fabulous contribution to the world of historical fiction and I’m so excited to see what Grey has coming up next for me. I absolutely recommend this one!