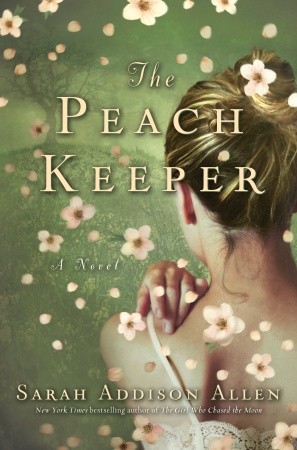 The Peach Keeper by Sarah Addison Allen
Published by Bantam, an imprint of Random House

Willa Jackson and Paxton Osgood grew up and still reside in the small Southern town of Walls of Water, North Carolina. The women have never been friends, although their family histories would encourage them to be so. Willa’s family once owned the Blue Ridge Madam – a huge mansion that has stood for years, unused, a testament to the scandal that became the Jackson family years ago. And now Paxton has decided to restore the home to its former glory and use it as a luxury inn. But there is a mystery surrounding the Blue Ridge Madam, and like it or not, Paxton and Willa must work together to uncover long-buried secrets their families, and their town, have kept from them all these years.

Even though I have never lived in the South (Orlando might be in the southern part of the country, but it is definitely not The South), I always love a good Southern fiction novel and The Peach Keeper really worked for me on that front. The history between the two families, the old money secrets and drama, and the atmosphere of living in a small town – I loved all of these things. The mystery aspect was engaging and it kept me on the edge of my seat, although I have to admit that for me the mystery was secondary to my getting to know these characters. While I was interested in uncovering the family secrets, I was more interested in the present day issues faced by Willa and Paxton.

I liked both Paxton and Willa as main characters; in fact I couldn’t decide which woman I enjoyed more. I rooted for both of them to find love and happiness, and I hoped desperately that they would become the friends it was clear they were destined to be. I was happy to see them work together to uncover their family secrets and Sarah Addison Allen gave me a nice conclusion to that issue. Both Paxton and Willa were unique individuals with well-written, fleshed-out personalities. It was clear that they were very different people, yet at the same time they were able to form a bond that had eluded them for years.

While The Peach Keeper isn’t the kind of heavy, complicated novel that I sometimes enjoy, it was the perfect mix of sweet and mysterious, with a tiny bit of magic thrown in, that I absolutely enjoyed it. This is a feel-good, wonderful piece of Southern fiction.

7 thoughts on “The Peach Keeper by Sarah Addison Allen”