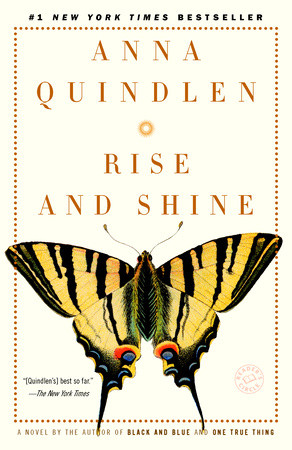 Rise and Shine by Anna Quindlen
Published by Random House

Successful and powerful Meghan Fitzmaurice is at the top of her game as the host of the country’s most watched morning show, Rise and Shine, when the otherwise perfect Meghan utters two insulting curse words into her mike on live TV. She cuts to a commercial, but it’s not long before she realizes that the whole world heard what she said – and the media storm begins. Her younger sister Bridget, a social worker, is used to living under the radar and in her sister’s shadow, but the sudden media frenzy and attention puts them both in the spotlight and changes both of their lives.

Rise and Shine is, at its core, a simple story about two sisters just trying to figure things out after their worlds have changed drastically. When I first started the book, I really didn’t get what the big deal was about Meghan swearing on TV – it happens, people are not perfect, etc. – but the way that Quindlen played things out made me understand that to Meghan and her fans, it was a huge thing. Quindlen did a fantastic job portraying the fact that there really were two Meghans – the real Meghan, and then the image of Meghan that people think they know, the one who’s on TV and in the magazines and all that. It made me stop to consider what it must be like for celebrities and people who end up in the media to have to keep up that act, to have to always be “on” and always be trying to keep the fans happy. I mean, the money sure is nice but it would be difficult to have to keep that up all the same.

I related to both Meghan and Bridget and liked both of the characters but I have to say that I have a softer spot for Bridget. She was very supportive of her sister, always putting her needs secondary to Meghan’s, and I admired that in her. She was probably the closest person to Meghan, and she really knew her for her true self, and still she admired her and looked up to her as her big sister and best friend. Generally speaking I enjoyed watching this relationship between the two of them play out throughout the book, as I have a younger sister too and could truly relate to some of their struggles.

I enjoyed the ending of the novel in a way I was not expecting. For a while in the middle, the book sort of flounders and I was concerned that it wouldn’t do much else, wouldn’t hold my interest and I would end up being frustrated with it. But there is a real climax at the end that pulls everything about the novel back together and it definitely worked. I thought that was extremely well done.

I listened to this book on audio and it was an enjoyable experience. The narrator wasn’t fantastic but she did keep my interest and did a decent job overall. The novel wasn’t too “heavy” which always makes for good listening, in my opinion.

Overall, I really enjoyed Rise and Shine. Great characters, a plot that moves along nicely, and the audio afforded a nice listening experience.

12 thoughts on “Rise and Shine by Anna Quindlen”