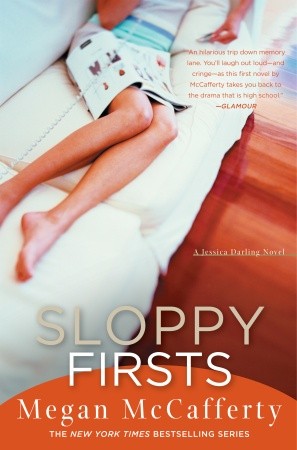 Sloppy Firsts by Megan McCafferty
Published by Broadway, an imprint of Random House

Sixteen-year-old Jessica Darling is devastated when her best friend, Hope, moves to another city just before their junior year of high school. Jessica can’t figure out how she’s supposed to survive both at school and at home without her one and only confidant by her side. So she writes letters to Hope, and also keeps a journal of all the teenage drama she endures throughout the year.

I had been meaning to read Sloppy Firsts for such a long time, so when I finally picked it up it was with high expectations and a bit of trepidation. Jessica Darling is a much beloved character in fiction, and I was worried that I might not love her as much as some of my bookish friends have.

I shouldn’t have worried, because I was enamored with her from the start. Jessica is such a relatable teenager, she’s going through things that every girl has dealt with in high school – she’s trying to fit in, she’s trying to balance what her parents want her to do with what really makes her happy, she’s crushing on a guy she knows she should stay away from, and she’s doing all this without her best friend around for support. I completely “got” her and rooted for her throughout the novel.

I was surprised by the fact that Sloppy Firsts deals with some mature subject matter. This isn’t really a book for younger teens, but the way these things were handled was done appropriately and honestly. Many sixteen-year-olds have sex, do drugs, and engage in other illegal behavior, and even more teens know someone who does even if they don’t themselves. I like that Jessica was essentially a “good girl” but she had her moments, and more than that, she was portrayed very realistically.

This book is told in diary format, and that style definitely served its purpose. The reader gets to hear from Jessica directly – in fact, the reader is privy to her deepest, most innermost thoughts – and this allows the reader to get to know her quickly and without any emotional walls getting in the way. It also made for some very fast reading.

There were so many things I enjoyed about Sloppy Firsts. I can’t believe it took me so long to read this book, but I will definitely not be putting off the other books nearly as long. I would definitely recommend picking up this novel for a fun but realistic glimpse into the life of an average teen girl.