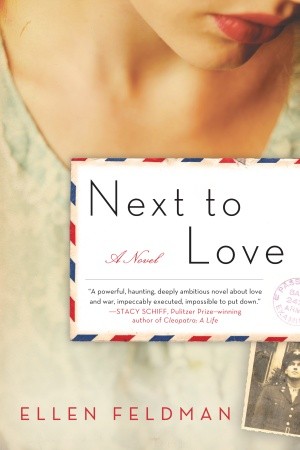 Childhood best friends Babe, Millie, and Grace have always been there for one another, and when the men they love go off to fight in World War II, it is no different. They remain tight as can be, living their lives the best way they can in their small Massachusetts town while there is a war going on overseas. The war brings many changes to their lives, it forces them to grow up quickly and to reinterpret their worldviews. As their lives change, America changes around them, and the reader is given a peek into how much the war shaped everything about their lives.

Next to Love is a unique war novel that is truly not to be missed. Rather than being about the war itself, this novel focuses on those left behind – the wives and families of the soldiers. I was surprised by the fact that the book spans such a huge amount of time, pleasantly so as it really gave the reader the opportunity to get to know these characters as completely as possible.

Speaking of the characters, I loved all three of them. Babe, Millie, and Grace had three very different experiences in the years the book followed them and these experiences shaped so many of their choices and the directions their lives took. I loved the fact that they stayed best friends throughout all of this, even when they dealt with extremely difficult times. I just really enjoyed getting to know the three of them and following them throughout all the ups and downs of their lives – before, during, and after the war turned their worlds upside-down.

I think the biggest thing I took from this novel is the fact that war changes everything. It does not come and go, leaving people to their own devices, but rather it lingers for decades afterword, affecting everything and everyone it touched. The lives of the people in this novel were changed irrevocably, and in many cases were destroyed, because of World War Two. This novel was heartbreaking at times, and bittersweet, but in the end it gave me hope that these characters would persevere despite the obstacles they had faced.

I truly enjoyed the experience of reading Next to Love. While the story spans decades, it never feels too long or complicated. Instead, the reader is treated to an in-depth understanding of the three major characters, and a clear view of how World War Two affected everything about their lives. I would absolutely recommend Next to Love to any fans of contemporary and historical fiction.

13 thoughts on “Next to Love by Ellen Feldman”