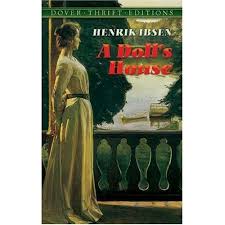 A Doll’s House by Henrik Ibsen
Published by Dover

This short (88 pages) play tells the story of married couple Nora and Torvald, who have a traditional marriage in that Torvald is a bank manager, responsible for the finances of the home and with that, all decisions except those Nora is allowed to make about herself, the home or the children. When Torvald requires a treatment for an illness they cannot afford, Nora acquires the money and tells him it’s a gift from her father, but really it’s an illegal loan she’s acquired from the bank by forging her father’s signature. While Nora knows she shouldn’t have done something illegal, she also feels that she was doing something to protect and help her family, and that makes her proud. The end of the play is a confrontation between the two of them as Nora realizes she has the ability to be an intelligent, independent woman and Torvald can only laugh at this possibility.

I don’t normally read plays, so I have to admit that I went into reading A Doll’s House with a fair bit of trepidation. I needn’t have worried, though, because I zipped through the book in one sitting and it provided me with much food for thought.

What surprised me about A Doll’s House was just how current the message is, especially since it was written in 1878. For the first fifty pages or so, the message is definitely dated, as women now have autonomy over financial decisions and most women have held a job at some point in their lives. I also think most marriages are pretty equal in terms of who gets to decide what happens with the family finances (at least, most marriages that I know of). But it’s the end of the book that really gets to the heart of the matter, and that’s where I think the play really shines and holds significance for women of today’s world.

While I don’t want to give anything important away, the end of the book is basically a stand-off between Nora and Torvald. Nora is asserting the fact that she is a person, independent from her duties as wife and mother, and she should be treated as such. She makes the case that just because she is a wife and mother, her own humanness shouldn’t be sacrificed for the sake of her husband and children, and that she should have the right to think for herself and make decisions according to what is best for her individually. I think that many mothers struggle with this even today – the question of being an independent person apart from one’s husband and children is something that I see all the time. Women ask themselves, do I make a decision based on what’s best for me, best for my husband, best for my children, or do I try to make a compromise for all of us? While A Doll’s House was about more than just that question, that was the point Nora got to by the end of the play and I do feel that was, in the end, the biggest message here. Women do compromise their needs and desires and put the other members of their family first – and by the end of the play, Nora wasn’t interested in doing that anymore.

Anyways, I really appreciated A Doll’s House for its central message and was surprised to find how current that message still is. For anyone interested in reading classic feminist literature, this book is an important work to pick up.

15 thoughts on “A Doll’s House by Henrik Ibsen”