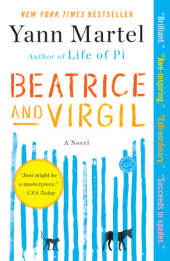 Henry found huge success with his first novel, and now, years later, he is having difficulty getting his publisher on board with his second novel. When a fan writes to him asking for assistance with his/her own writing, Henry decides to just visit this person at their place of work. This fan turns out also to be named Henry, is a taxidermist, and he asks Henry (the writer) for help with a play he’s writing. The play stars Beatrice and Virgil, a monkey and a donkey, and Henry soon becomes entranced by their story.

After loving Life of Pi when I read it years ago, I’ve been looking forward to reading Martel’s next novel, but when Beatrice and Virgil came out it received very mixed reviews from bloggers I quite respect. I put off reading it for a long time because I feared that I would be disappointed by it, but I knew eventually I would get to it so when the ladies at TLC Book Tours offered me a spot on this tour, I couldn’t pass it up.

Am I glad I read Beatrice and Virgil? Absolutely yes. Did I enjoy the novel? Honestly, I’m not sure. There were many aspects of the novel that enthralled me, but other things just made me angry. Allow me to begin with the positives.

First, the writing. Yann Martel definitely knows what he’s doing when it comes to putting together a sentence. As was the case with Life of Pi, I found myself captivated by loooong paragraphs just because of the beauty of how he wrote said paragraphs. The characters in this novel could have been talking about the most mundane topics (and at times, they were) yet I was still interested and engrossed because of the writing. For me, this is big.

Henry (the writer) I liked immediately. I actually loved the first half of the book because I sort of adored Henry. He is charming, in an awkward way, and loves his family so very much (he has a wife and daughter who are extremely minor characters in the novel), and I admired how he was willing to write a book that was so outside the box that nobody would publish it, even though he was incredibly talented and renowned.

But here’s the tricky part, because the ending pretty much ruined the entire book for me. And now, a few days after finishing the book, I can look back and realize that the majority of the book was extremely good, and the writing was beautiful, and yes I liked it for the most part. But when I finished the book, I was so angry and hated the ending so much that I honestly thought I would write an extremely negative review. Now that it’s been a few days I can truthfully say that overall I enjoyed the book. But the ending? Horrible. And also, I hate when animals suffer unnecessary violence and/or death in books, so I’m mad at Yann Martel for that too.

So, overall, I loved the concept of Beatrice and Virgil and, for the most part, I was happy with the execution of it too. But there were a few things that really did not sit well with me and because of that I can’t wholeheartedly say I loved the book. I didn’t love it, I appreciated it, but with reservations. Still, I would recommend it because the writing is gorgeous and the concept is very interesting and creative. Just be prepared for Martel to shock you and possibly create anger too. A book that can create so many emotions in the reader, however, is always a good one to read and discuss. So read it, discuss, and tell me what you think!

19 thoughts on “Beatrice and Virgil by Yann Martel”