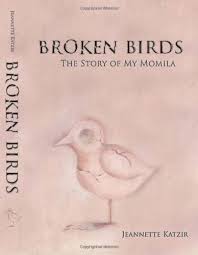 Jeannette Katzir’s mother Channa and father Nathan both survived the Holocaust, after which they traveled to the United States to raise Jeannette and her four siblings.  Although the war was over before any of her children were born, Channa’s parenting is heavily influenced by how broken she is from what she suffered during that time.  Jeannette (or Jaclyn as she is called in the book – all names have been changed due to factors that become clear as you read the book) and her siblings are taught to trust only family and nobody else, which makes things even more emotionally difficult for these siblings when some of them turn out to be untrustworthy.  This is the story of Jeannette’s broken mother, her father, her siblings, and most of all Jeannette’s own story as she grows up in this family.

Broken Birds is a thoroughly engrossing, emotionally charged memoir that chronicles the history of one family struggling in a lot of ways.  The memoir begins with Katzir telling the story of how both her parents came to survive World War II, how they traveled to America, and how they met and fell in love.  The family drama is present right from the start, as Channa’s brother, loyal brother that he is, is also a manipulative and selfish person.  So it’s clear right from the beginning that Channa will have some issues to work through – and as the reader learns more about her life, we learn how these issues impacted her children.

While Broken Birds was clearly inspired by Katzir wanting to tell the story of her mother’s life, the story of her own life is much more prominent.  By that I mean that the book is very much about the drama and issues between herself, her parents, and her four siblings.  Two of Katzir’s siblings are incredibly manipulative, spiteful, and just plain mean – looking out for their own interests and not having a care in the world about how their actions affected the rest of the family.  Much of the memoir is devoted to the fights and disagreements between these two siblings and the rest of the family.  I have to admit that I found a lot of this interesting, and I was completely sucked into the family drama.  It was like reading a reality TV show, in a way.  I was completely distant from the struggles that were happening but it was like I was right in there with the family, a fly on the wall.  I found it entertaining, to say the least.

I must admit that while I enjoyed reading about the family struggles within the book, it might have been a touch overdone.  The reason I say this is that the parts of the book I most enjoyed had more to do with the history of Katzir’s parents and all of that, and while I was interested to read about the current family issues, I think some readers will feel that it’s too much.  The book is on the longer side, and as most of it is made up of the present-day stuff, it can get a bit tiresome.  However, I did enjoy it so I’m certainly not cautioning people against reading it.  Just that I can see how some readers may not enjoy it as much as I did for that reason.

Overall, Broken Birds is an interesting, engrossing memoir about one family’s struggles to get along and the mother who was the glue that held everything together.  While it wasn’t a perfect book, I definitely enjoyed it.  I couldn’t help being intrigued by this family, and Katzir’s memoir certainly provided me with the insight I was looking for.

6 thoughts on “Broken Birds: The Story of My Momila by Jeannette Katzir”