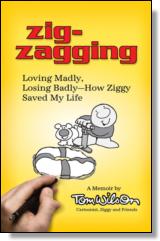 Zig-Zagging is the heartfelt memoir of Tom Wilson, the cartoonist behind the Ziggy and Friends cartoons.  The Tom Wilson of the book is not the original creator of Ziggy, however – that would be Tom’s father, Tom Wilson, Sr.  Zig-Zagging covers much of Wilson’s life – he takes the reader on a journey through parts of his childhood, through watching his dad create the hugely-popular Ziggy cartoon, his father’s chronic illness and his subsequent takeover of Ziggy, all against the backdrop of his dealing with the crippling grief of his wife’s death from breast cancer at much too early an age – leaving Wilson a widow with two young sons to raise on his own.  Zig-Zagging is the story of how Wilson handled the challenges that were thrown at him, how he suffered and came through a terrible depression, and how, ultimately, he became incredibly successful following in the footsteps of his beloved father.

What Wilson went through can only be described as excruciating – first his father, his idol, the person he looked up to most in the world, became very sick, and then the love of his life and partner in all things fought breast cancer for SEVEN years before her body just couldn’t take it anymore.  Wilson was left all alone, with two young kids, a business to run, and dealing with the kind of depression he’d only read about and never dreamed he would actually experience firsthand.  His story of overcoming all of these obstacles to run a successful company and raise two happy, well-adjusted kids can only be described as remarkable.  His story is incredibly uplifting and an inspiration to all.

I enjoyed reading the portions about his father, Tom Wilson Sr., just because of what a great influence he was on his son – and how he truly encouraged him to be his own person, to use creativity to solve problems, and to have fun in whatever he was doing.  The parts of the book where Wilson described his wife Susan’s battle with cancer definitely brought tears to my eyes.  It was so obvious how much he completely loved and adored her – and very clear how hard the two of them fought this cancer battle even with how much the disease was fighting against them and threatening to take over their entire family and their lives.  Susan’s battle is truly an inspiration to anyone dealing with cancer, or any other crippling disease.

There was one thing about Zig-Zagging that I didn’t love, and unfortunately it’s kind of a big thing.  Typically with memoirs, I get very invested in the characters, I truly see and feel what they’re going through right along with them – reading a memoir can be an extremely emotional experience for me.  In all honesty, that’s what I prefer – I want the author to show me what they want me to know, not just tell me.  And I want to feel it.  With Zig-Zagging, I’m sad to say that I didn’t quite reach that point.  Something about the way Wilson wrote the book… it felt more like he was telling me about his experiences rather than showing me, rather than connecting with the reader and really drawing them in.  So because of this, the book definitely lost something for me.

The good news is that my major criticism is completely subjective – anyone else could experience the book in a totally different way from the way I did.  So I’d absolutely recommend reading Zig-Zagging – it is ultimately a deeply uplifting and very hopeful story.  Tom Wilson has really been through a lot of difficult times, and through it all he has channeled his energy so positively, it’s truly an inspiration.

Make sure to check out author info as well as the rest of the tour stops over at the TLC Book Tours page for Zig-Zagging!