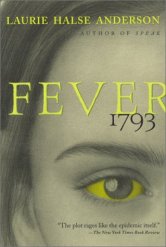 Fever 1793 is the story of the 1793 epidemic of Yellow Fever in Philadelphia, Pennsylvania told from the perspective of a young girl, Mattie (Matilda).  Mattie lives a simple but very happy life which mainly consists of helping run the family coffee shop, along with her mother and grandfather.  When rumors of “the fever” begin sweeping the area, the family really isn’t sure what to expect.  But when Mattie’s mother shows signs of being ill, she orders Mattie and her grandfather to leave the city and the disease.  What Mattie finds is that there is just as much terror and disease outside the city as in it.  And she quickly realizes that it is up to her to figure out how to survive the epidemic.

In all honesty, I thought the novel was just okay.  I loved Speak, which was my introducation to Laurie Halse Anderson, and I love historical fiction, so I had expected to love Fever 1793.  The story was interesting enough, and it moved along rather quickly, but it took me way too long to become invested in the characters – and to care about what happened to them.  It was a worthwile read for me, though, because prior to my exposure to Fever 1793, I didn’t know there was a Yellow Fever epidemic in Philadelphia during that time period.  Also, I found the notes at the end of the book interesting and helpful – it’s always nice to learn something while reading for fun.  Overall, I feel like Fever 1793 was a decent book, just not one of my favorites.  I’d still recommend it, especially for young adults interested in history and/or medicine.